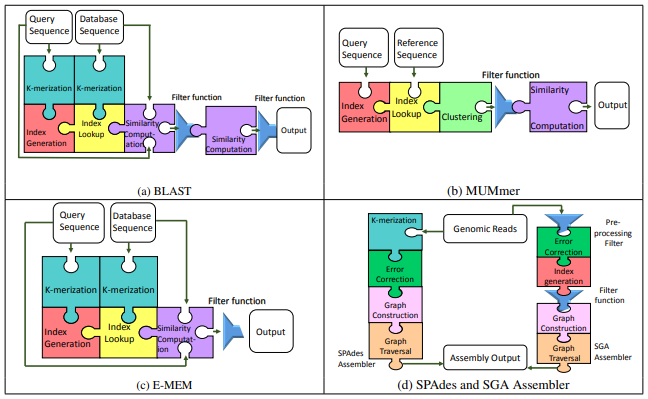 Abstract
Breakthroughs in gene sequencing technologies have led to an exponential increase in the amount of genomic data. Efficient tools to rapidly process such large quantities of data are critical in the study of gene functions, diseases, evolution, and population variation. These tools are designed in an ad-hoc manner, and require extensive programmer effort to develop and optimize them. Often, such tools are written with the currently available data sizes in mind, and soon start to under perform due to the exponential growth in data. Furthermore, to obtain high-performance, these tools require parallel implementations, adding to the development complexity.

This paper makes an observation that most such tools contain a recurring set of software modules, or kernels. The availability of efficient implementations of such kernels can improve programmer productivity, and provide effective scalability with growing data. To achieve this goal, the paper presents a domain-specific language, called SARVAVID, which provides these kernels as language constructs. SARVAVID comes with a compiler that performs domain-specific optimizations, which are beyond the scope of libraries and generic compilers. Furthermore, SARVAVID inherently supports exploitation of parallelism across multiple nodes.

To demonstrate the efficacy of SARVAVID, we implement five well-known genomics applications—BLAST, MUMmer, E-MEM, SPAdes, and SGA—using SARVAVID. Our versions of BLAST, MUMmer, and E-MEM show a speedup of 2.4X, 2.5X, and 2.1X respectively compared to hand-optimized implementations when run on a single node, while SPAdes and SGA show the same performance as hand-written code. Moreover, SARVAVID applications scale to 1024 cores using a Hadoop backend.